Following a highly unscientific Twitter poll conducted one drizzly Wednesday afternoon we’ve made the decision to launch a brand new series of our podcast Midnight Chats by telling you about a bunch of the guests we’ve got lined-up. In the past, we’ve kept the names under wraps until each new episode is out, but, well, sharing is caring.

The exciting news: series 9 begins at midnight Thursday 5 March. There are 10 new conversations, a new episode released on Thursday nights at midnight for the next 10 weeks.

We kick off with Tame Impala – Kevin Parker in conversation about astronomy, diva demands and the ear-exploding volume Travis Scott makes music in the studio. Beyond that, the coming weeks will see podcasts released with Carly Rae Jepsen, Caribou, La Roux, Radiohead‘s Ed O’Brien, Simon Neil from Biffy Clyro, James Acaster and more.

Hear the trailer for the new series below, or better still, pick up your phone and subscribe to the podcast wherever you listen to yours. It’s on Apple, Spotify, Google, Acast and other places. We’ll also post them here on the website.

Special thanks to The Great Escape festival for supporting this series of the podcast – tickets for their 2020 edition are available now. 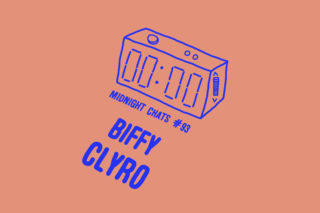